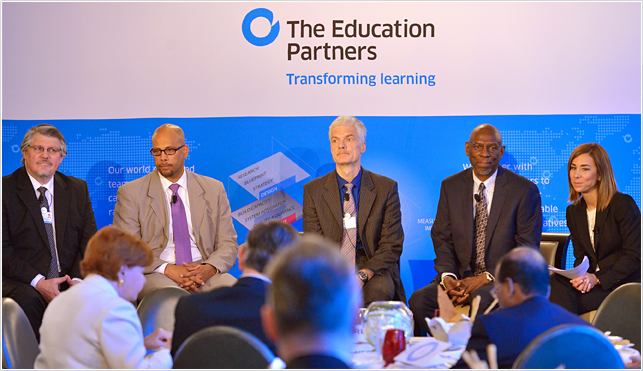 "It’s mad," everyone told me about the Global Education and Skills Forum in Dubai before I went. "You won't believe your eyes." And they were right. Speaking as a man who’s organised his share of education conferences, I’m guessing the organisers of this didn’t spend the night before curtain-up stuffing lanyards and folding leaflets. This doesn’t just push the envelope of conference majesty – it franks, addresses and posts it, on a silver platter, on Concorde.

The conference is breathtaking in its ambition, breadth and star power. In one day I saw (and spoke to) Tony Blair, Bill Clinton, and His Highness Sheikh Mohammed bin Rashid Al Maktoum, ruler of Dubai. I watched a lunch panel discussion where one table was populated entirely by current and former prime ministers. You only have to reach a hand out and someone puts what you needed in it, so invisibly efficient is the infrastructure (putting my own conference pots of gummy bears and free pens somewhat in perspective). Men and women were flown in from every world timezone to talk about education.

In the gargantuan Atlantis Ball Room (impossibly, impossibly endless) the Global Teacher Top Ten were being interviewed by Kate Silverton. Outside, I stumbled across an enormous wall composed of their faces, respective flags draped nearby, like a May Day Parade in Red Square. I was nominated for this prize, and made the Top 50. The glittering million dollar prize never seemed a real possibility, and I took an "it’s an honour to even be nominated" attitude, which makes it impossible to feel anything other than proud no matter how far you get. And it’s true (plus: CV Gold FOREVER). I’m just glad no one caught a picture of my face when I first saw the wall of honour.

Today, you eat with the big fish 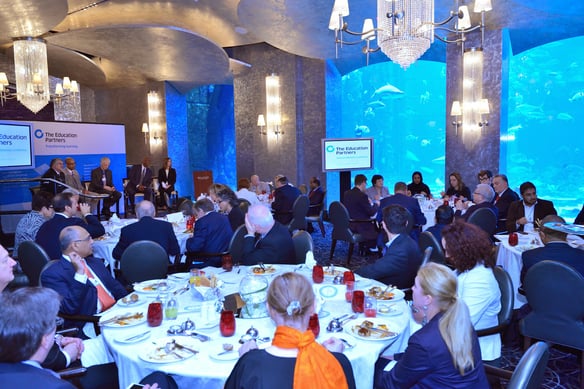 I was invited to watch a panel debate hosted by the Education Partners; I was late, of course. It was held in a restaurant dominated and dwarfed by a 30-foot high fishtank that resembled the London Aquarium, 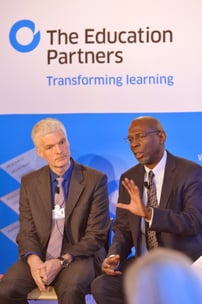 and as stingrays glided past us, we dined and listened to Andreas Schleicher, who is EVERYWHERE at this conference; James Shelton III, formerly of the US Department of Education, Brian Schreuder, as well as someone I’ve wanted to meet for ages: Geoffrey Canada, from the Harlem Children’s Zone. The latter was brilliant, and I have to confess an interest here in that we had already asked him to speak at a panel debate in researchED New York in May – this was the first time I saw him in the flesh and he is a rare combination of entertaining and brilliant. I also met Caroline Boswell of City Hall, London. Small bleeding world. That, and a table full of ex-presidents, and the surrealness just tipped the scales and made them smoke. That and the fish tank.

And so, to the Oscars for teaching. Thousands of people in the hall: check. Opening performance by students singing You Raise Me Up: check. Muḥammad bin Rāshid al Maktūm, vice president, prime minister and Ruler of Dubai gliding in with his entourage: check. Bill Clinton being charming about teachers, handing out a golden award, and a concomitant million dollars to the winner: check. Personal video message from Bill Gates: check. I was starting to think that my conferences might need a bit of geeing up by comparison. I comforted myself that we had, at least, pens that light up.

It was an astonishing event, choreographed like an orchestra, not a hair out of place. You could feel every penny spent on it. I have to say, I think in a world where teachers are rarely thanked for anything, I’m for this. I think we should take our support where and when we get it. Teachers deserve status, and this award certainly represented that. Why on earth shouldn’t we have an Oscars night? No one is claiming the winners are objectively the best teachers in the world, anymore than Forrest Gump was objectively the best film of 1994. The process is the point; valuing teachers, or films, is the point. Everyone in the top ten deserved to be there, and the winner, Nancie Atwell from the US, is a great representative of our profession. I hope we hear a lot more about her, as well as the other candidates.